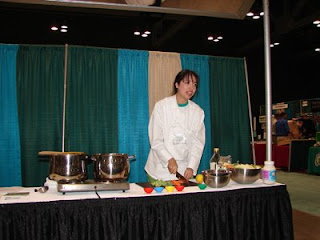 Last weekend I had the wonderful opportunity to offer a cooking demo at the Austin Green Living Expo.
I was sponsored by Greenling, Austin’s own local and organic food delivery service. They brought super fresh produce, including cabbage, broccoli, and cilantro which are all in season.
I made the same dish both days. It’s called uppma and it is an Indian light meal snack made with semolina. Semolina is a wheat product used in making pasta. In uppma, it creates a light and fluffy polenta type dish seasoned with traditional Indian spices like mustard seeds, cumin, and turmeric.
After making enough for about 30 people and serving it out in less than 10 minutes, I was wishing I could have made more! A small 2 burner stove just doesn;t have the heat output needed to make huge amounts of food fast. Those that got a sample loved it. It was served with Austin’s local yogurt, White Mountain Bulgarian style. If only I could have found local achar (Indian pickle). 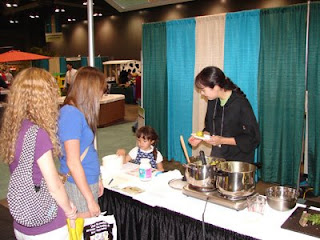 My daughter says “I’m up for some uppma!”

Here’s the recipe for uppma: 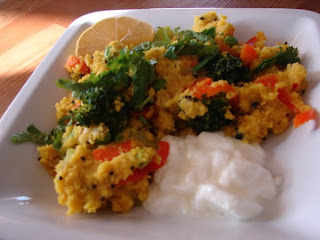 Preparation
Take a large pot and begin boiling the water. In another heavy bottom pot,bring to medium hight heat and add oil. Add mustard seeds and urad dahl, and heat until they pop. The add cumin and the veggies. Stir-fry until cabbage is wilted and broccoli is bright green. Add this veggie/spice mixture to the other pot of boiling water. In the pot that you cooked the veggies in, put in the butter and wait until it is melted before you add the semolina. Stir the semolina/butter mixture until the semolina gives off a nutty smell. Be careful not to burn.
Add the salt to the boiling water and then all of the semolina. Give it a good stir to
make sure all of the semolina is incorporated and there are not dry spots. Turn the heat to low, cover and let steam for 5 minutes. Remove from heat. Add lemon juice. When serving, add cilantro. Perfect with yogurt and mango pickle!

Im still waiting for my little video clip to upload, but hopefully it will be on soon!